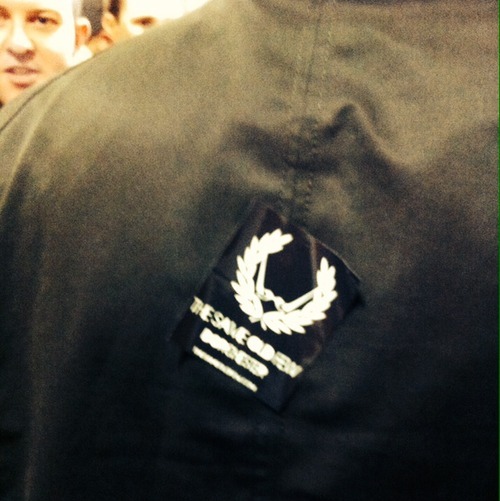 It was the Mother’s birthday this weekend, so I went all out and treated her, by buggering off down the Avenue, spending a fortune in the local drinking establishments and waking up on the floor of Steve’s bedroom. Happy birthday Mum!

We don’t tend to bother about writing about home games here at The Same Old Few. From my part it’s because every single blog would be identical (see above) but mainly because none of us regular contributors make it to home games any more. Three hours spent on South West Trains with 90 minutes of Conference South football at the end?! No, ta. We like getting drunk, make a noise and generally take the piss a bit. Can you imagine how that would fit in at The Avenue!?

But on this occasion, we’ll break the mould. It was Alan’s birthday on Saturday and the granddad of the group deserves a shout out. The other reason is because it was Sutton in town. And Sutton means points… and passing out, somewhere. In the away leg, our friends over at Gandermonium where good enough hosts to get us utterly plastered and even put us up for the evening. Only right that one of us, under the guise of a family birthday, shows our face. We owe ‘em one.

I’ve got a lot of time for Sutton. Without wanting to become too much of a obsequious sychopant, it’s hard not too.  Their fans get behind their club, buying merchandise, supporting the fundraising schemes, volunteering time etc. But most of all, they love to get drunk and sticker the fuck out of opposition grounds (More on that later).

Earlier in the week, we found out that one of our lot, Mike (that’s not his real name, to save him any embarrassment. His real name is Max) used to shag the former Mayoress of Sutton. So you can imagine, upon meeting up with Steve and then heading to The Junction to meet up with the Gandermonium lot, that it was only a matter of seconds until I blurted that one out with more than a small degree of delight.  At least somebody at Dorchester Town FC can score.

We headed round to the George (where Steve showed utter disregard for his ban – cos you can quite easily at 11am) for a couple more, where Tom and Jake joined us, before leaving the Sutton lot to their pub crawl around town, as we jumped in a taxi to do our duty and put some coppers behind the Avenue bar.

The game was a dull, dull affair, which saw us hang on for a much needed point. We travel to second place Eastleigh tomorrow and then it gets serious, with seven of the proverbial “six pointers” in a row. 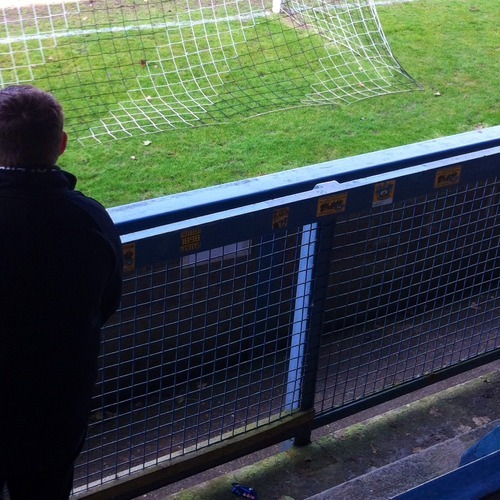 Back in the bar after the match and things took a surreal turn as our over officious safety officer took umbrage with the Sutton lot stickering the fuck out of the home terrace (as we did at their place) and made a complaint straight to Sutton Chairman. I’m still not quite sure how stickers are a risk to supporter safety (for that is all a steward is there to look after and nothing more) but it led to a really quite bizarre series of events where by one of the Sutton lot was pulled aside by their chairman and given a bit of a word, before a director of ours came over and told them “Don’t worry about it lads” and with a point of the finger at us lot, said “These lot are just as bad at it.” Guilty, your honour. 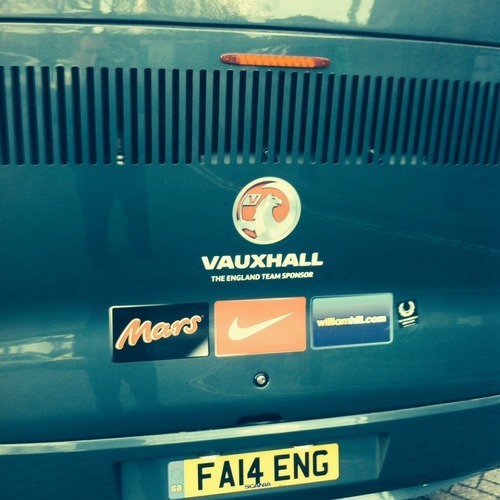 (You bring the England bus, expect it to get stickered. Make complaints available to….)

And with that goodbyes were said. The Sutton lot heading back to Dorch South station and us lot staying in the bar, drinking shots of Malibu, abusing Alan Walker-Harris and boring the arse off the safety steward, who by this stage appeared to be feeling a little bit sheepish about the earlier act of jobsworthery. (Fuck off, it’s definitely a word) 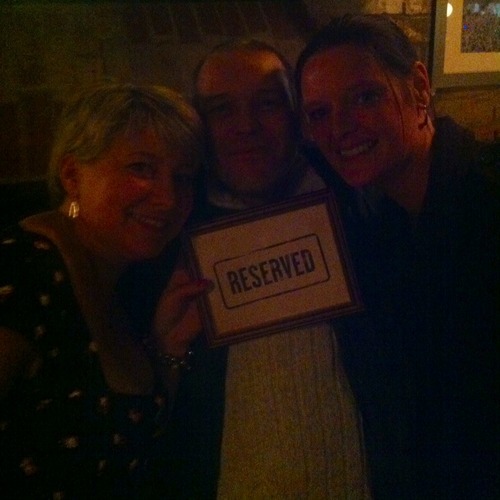 Having been kicked out of the bar at closing time, we headed up to Vivo Lounge to continue celebrating Alan’s birthday and jumped on to some poor lady’s hen do. Red Rags to a bull for the single lads, but ultimately with no luck as the effects of a day of full on drinking got in the way and things got messy…. But not quite as messy as it got for Sutton, judging by this sent to us by the Gandermonium chappess the next day. 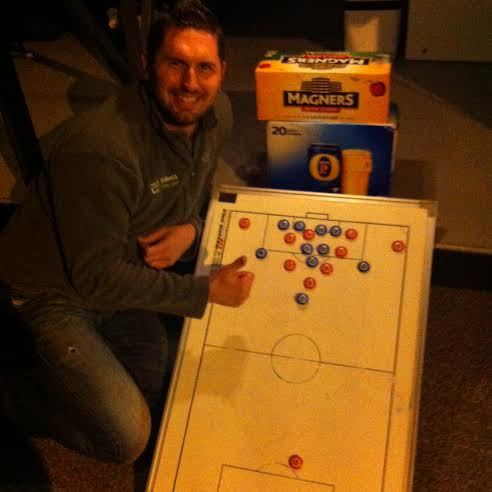 Charles Dickens once wrote “If anyone were to ask me what in my opinion was the dullest and most stupid spot on the face of the Earth, I should decidedly say Chelmsford.“ From that, we can logically deduce that ‘Dicko’ (as he was known to his mates) was in fact a Magpie. Sick as he was of always going there on a bloody Monday night, in the middle of fucking winter to watch us lose yet again.

And this year was to be no different, as we put up the meekest defence against a pasting since Nigella Lawson.

Despite the Monday evening kick-off, tradition was suitably adhered to, as I ran late by a good 20 minutes and Tom arrived at the local ‘Spoons long before anyone had even contemplated setting off.  Word about our antics has spread of late, so much so that we were joined by Scott, a Geordie colleague of Vossy’s. News also reached us on our departure from Liverpool Street that we would be joined by ‘Shanks’ who was in the area on business and had sacked off a posh dinner in the city for a spot of burger and chips… and perhaps ale. Definitely ale.

Shanks was holed up in Chelmsford well ahead of us and despite the pub being literally next door to the station, Shanks’ instructions over the phone to Vossy meant that he became harder to find than a Malaysian airliner, as we spent a good ten minutes wandering around the bus station looking him.

Once in the ground, we had a swift pint of the local ale before the turgidity of the first half began to dampen spirits. Fortunately we had two very amusing things to keep us entertained. Chelmsford’s keeper, who insisted on the much-needed instruction to his players to “Head it!!” with every long, hopeful Dorchester punt up field, and the second, which had us literally crying with laughter, was Tom’s [true] story of his ignorant American friend, from when they were studying together in Sheffield.

“So he didn’t really like football at all, but he came home one day wearing this Liverpool scarf. ‘Where did you get the scarf mate?’ I asked. ‘Outside Hillsborough. There was just loads of them lying about outside for some reason.’”

Unfortunately, neither team were particularly interested in playing football and so we headed in early to beat the [very orderly] queue for the bar.

The second half was a bit more eventful, as the Magpies made a bright start before the inevitable collapse. The antics of the home ‘keeper, Carl Pentney, meanwhile gave us plenty of amusement. First he took to shouting “hedges” whenever the ball came towards his 18-yard line (cue a number of shrubbery-orientated heckles from us). And this was shortly followed by attempting to set up a three-man wall for a drop ball – only to be told by his own captain to ‘shut the fuck up’. 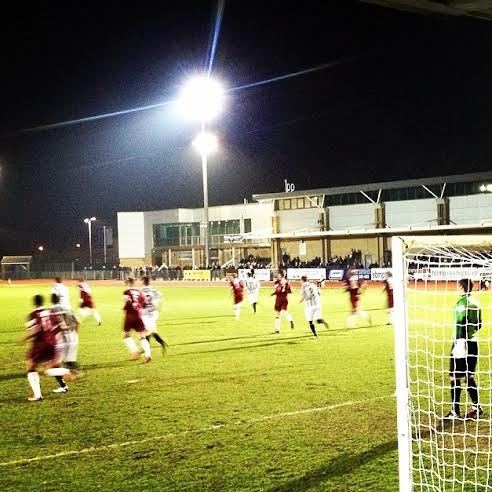 The best moment was saved until last though, as he misjudged Charlie Lossaso’s 40-yard daisy cutter and let it beat him at his near post. He didn’t hold his hands up as AWH would later to on re-creating the scene down the other end, oh no, he went ape-shit  at their number 8 (practically defining the phrase "apoleptic”) despite the fact that he had been on the half way like at the time of the strike.

When Shanks’ shout of “Keeper, you’ve only had one thing to do all night and you’ve even managed to fuck that up” went up, even his own captain and centre backs were laughing.

The heckles, laughs and general ambivalence to the scoreline continued as their number six eventually bit with the brilliant and witty retort ,“Yeah, well we’ve scored more than you.” Yes, and we’ve shagged your mum, mate.

Still, at least it was decipherable, which is more than can be said from whatever came out of the mouth of their number three, when questioned on how he could be the smallest player on the pitch when we were fielding an actual schoolboy. (At least said school boy could make it, Dan Munday was apparently unavailable as he wasn’t allowed to leave school early has he has GCSE’s coming up!)

With the game over, we had a couple more in the clubhouse before the taxi turned up. It was outside waiting for said taxi, that we came across the team coach, with the luggage locks wide open and the tactics board and two crates of ‘refreshments’ open to the world. Hours of fun. (Or a good five minutes as it transpired.)

Back in the town centre, we popped in to the bar for a couple of pints – refusing to drink Guinness or celebrate St Paddy’s Day as, well, as we’re not Irish – before manically jumping on the train home, leaving Shanks on the platform with a stolen novelty Irish hat. Ah. 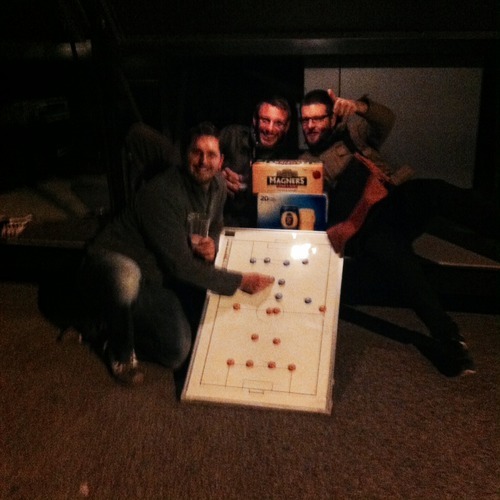