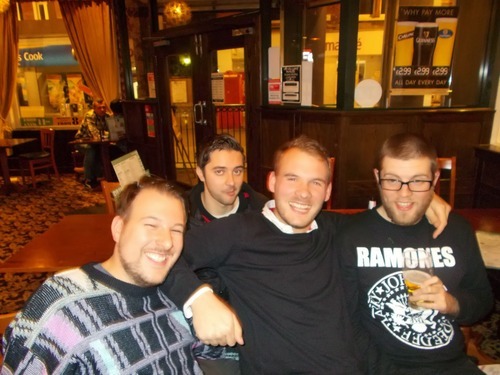 Celebrating a rare victory. (and Tom doing his ‘special’ face.)

The day started off with the usual routine: Tom and Fred getting to the pub ridiculously early, Eames texting us asking where we were as we had forgotten to let him know the plans and me, stuck on a train 20 minutes late. Again.

Usual protocol was being observed by the players too, with the now-customary Saturday morning pull-outs this week being fulfilled by Vickers, Smeets and Jake Rowley. It meant a debut for new signing Sam Lanaham who joined from some park outfit over Bournemouth way (No, not Poole Town), starts for both Jack Twyford and Danny Way, and a three-man bench with an average age so low that it was likely to attract the unwanted attention of BBC presenters.

Any fear and dread we had for the upcoming game was soon forgotten in The Old Bank as attentions turned towards Fred and his selection of tea in the first round of the day. Fred apparently wanted to ‘pace himself‘ through the day, a plan that was mocked but evidently came to have the last laugh, as there are no images of him asleep in the Tapuri doing the rounds on Twitter, unlike me.

Surrounded by Surrey-residing Liverpool fans, we decided to down our pints [and tea] and head off down the hill to the Cock and Bull. But with a atmosphere so dead that it could rival the Wessex, we decided to cross the road instead to The Treasury, a pub that on the outside aspired to be a Weatherspoons and on the inside the Raj Poot. Flowery wallpaper and everything. Fucking weird place. 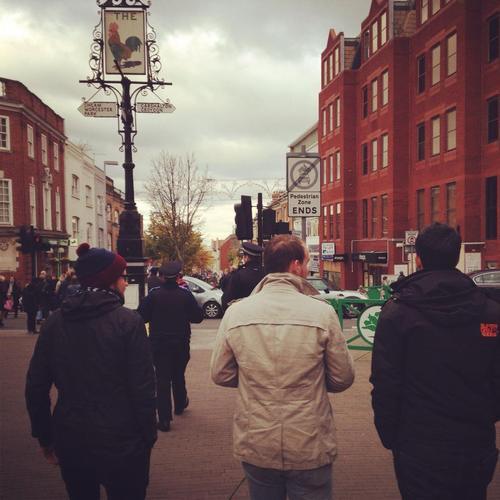 Today was Eames’ first game since Maidenhead, and so naturally conversation found it’s way on to strip clubs and the revelation that Eames’ missus once got chucked out of a strip club for touching. (That’s not really of any relevance, but a fact well worth sharing, I feel)

We headed to the ground, via The Grapes pub (where I stumbled across some 6% stuff. Bad idea in hindsight) only to find that kick off had been delayed by quarter of an hour due to the ref turning up late. As it transpired, he really was shite at keeping time. Still, 15 minutes to get a swift one in before the game. 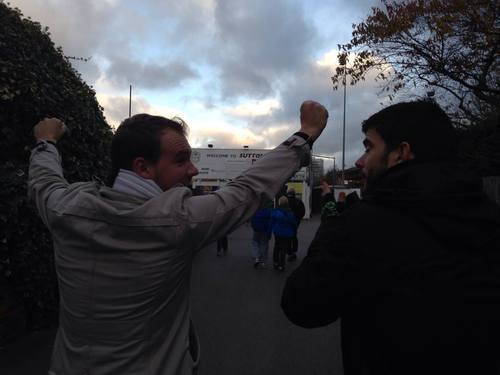 The game was largely a nervy affair. Sutton, as expected, had much more of the ball, lumping balls into the box for Slabber and Taylor. We were defending deeply and looking to counter through Critts, Twy and Brandon; and on the stroke of half time the latter had a great chance with a one-on-one, but did “a Groover”, hitting it straight at the keeper’s chest. Luckily though, it didn’t cost us, as on the 68th minute the impressive Alex Godfrey found Brandon and he made amends, just sliding the ball under the keeper, taking-a-fucking-age to cross the line and into the net. Cue delirium…and that awkward moment of running down to the front of the terrace in anticipation of mobbing the players, only to end up in no-mans land like a lemon as they celebrate miles away from you. 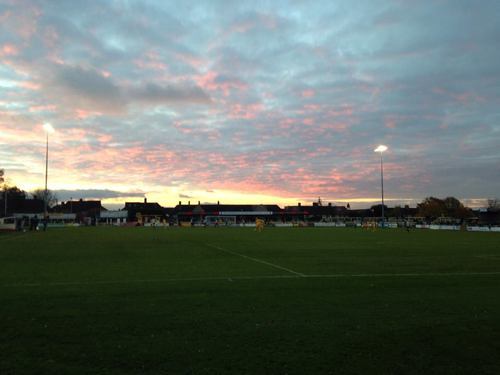 The ref, still struggling how to read the fucking time, somehow found 12 minutes of injury time from somewhere, meaning that much of the second half was spent shouting abuse at him with a mix of anger and sheer disbelief.

Back in the bar, we toasted a rare away victory and tried not to be so smug as we planned a pub crawl with the Gandermonium boys. Or in my case, make a complete cunt of myself when congratulating Josh Tennant on his performance, only to be told that it was Conor Jevons who came on, not Josh. Fuck. Sorry Josh.

Off to The Grapes with Nick and Amber Aleman, where we were joined by the rest of the Sutton lot. Plenty more of that 6% stuff whilst the conversation began to become slurred and quite surreal.

It’s about here that my memory of the night becomes hazy. I can recollect buying a Subway and subsequently dropping half of it on the pavement, but I don’t recollect drinking in the Tapuri – an Indian takeaway that apparently let us sit, have a beer and watch match of the day, and in my case, fall asleep. 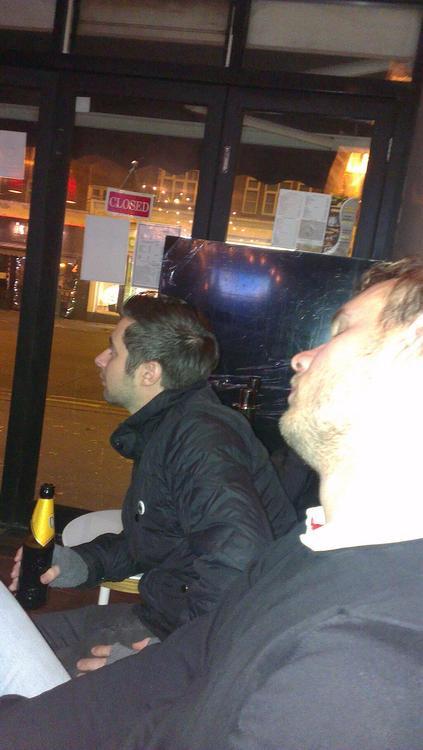 As festivities continued, we missed the last train home. Rather than risk falling asleep on a night bus and ending up miles away from home – or even worse, in fucking Bromley – we crashed at Nick’s place, where we were greeted this morning by a cup of tea. Much to Fred’s delight. 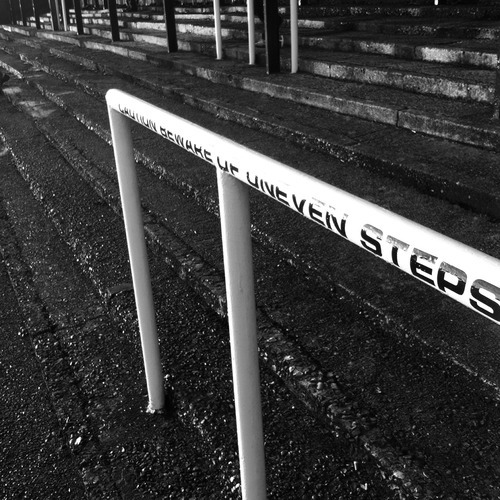 No one actually enjoys going there do they?! Least of all the frankly quite strange residents who live there. Which perhaps goes some way to explaining why they are currently opposing plans to extend the Wimbledon tram link through the town – presumably in a desperate attempt to resist shortening their commute home, thus ensuring they spend less time at home – in fucking Bromley.

One thing however that the place does have going for it – according to the South-East London residing Max – is a bloody good Waitrose. And given that a Waitrose is undeniably the hallmark of a good neighbourhood, perhaps our misgivings about the town were misplaced. (Dorchester, it should be pointed out has not one but two Waitrose’s, thus allaying any fears that the more cynical of readers may have had regarding the validity of the Waitrose effect.)

Waitrose or not though, Bromley is still a shite away trip but having just moved to nearby Gipsy Hill, yesterday’s trip was the perfect excuse to try out my local boozers. 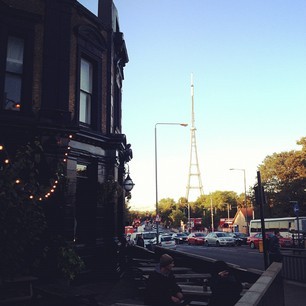 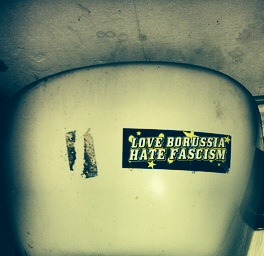 Convenient only, as it turned out, for those who had the vision and foresight to empty their bladders before embarking on a long, bumpy bus journey across south London. Fred unfortunately hadn’t been one of those people, and having spent the first half of the journey hopping around the back of the bus, decided enough was enough and ran off the bus at the first sight of a pub. (Fred wasn’t to be seen until midway through the first half. Hell of a piss.) 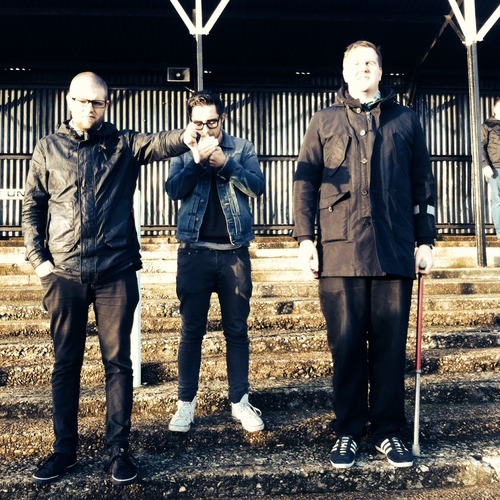 Having arrived at Hayes Lane, the now all too common sight of 90 minutes of football getting in the way of a good piss up reared its head once again.  And to make matters worse, Bromley only allow drinks to be consumed in a small area of the ground. A technical area, pretty much.  It meant that we had the pleasure of watching the home side stroll into a  half time 2-0 lead alongside the home ‘fans’.

Game of football complete, we resumed with drinking and the childish, but massively entertaining practice of seeing how many Dorch stickers we could plaster around the bar unnoticed, before heading into town for a ‘few’ more.

Bromley isn’t exactly known for its nightlife. In fact, the high street made South Street feel like Las Ramblas, but one thing it does have (apart from a bloody good Waitrose) is a Weatherspoons that actually churns out half decent food for a Spoons – as perfectly illustrated by me spreading my burger pretty much all over the 8 man table. Having stuffed our faces, shot the breeze and downed even more obscure session ales for a good few hours, we headed up to the Fullers pub for more beers and a discussion on the rules of Spoof.

With the others heading back in to central London and my train a good twenty minutes away, I decided to learn the lesson from Fred’s earlier mistake and empty the bladder before jumping on public transport. Donning a black and white scarf, I ran back into ‘Spoons to use the urinals, where a Bromley fan had had similar, wise thoughts.

“I was a fucking ledge at Hayes Lane today” he quipped. [Because apparently attending a match makes you a legend in Bromley?!]

“Oh right. Wow. Fucking hell! Fair play to you for coming all this way to support your club, that’s dedication” the little cunt said without a hint of irony.

“I live in Crystal Palace, mate. Like I’d come all this way from Dorset just to come to Bromley.” 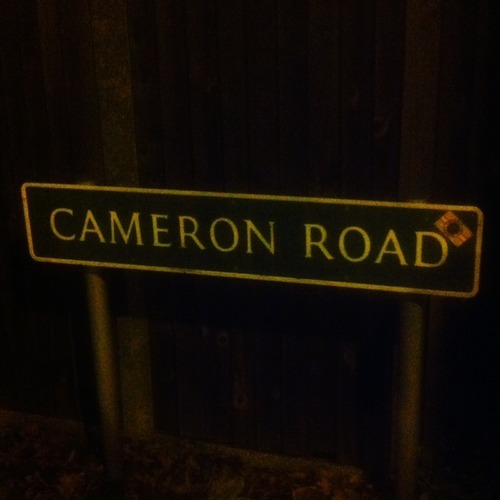